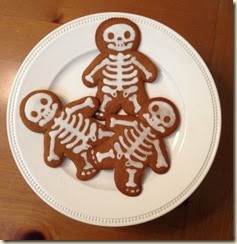 These skeleton gingerbread cookies are adorable ….but tons of work. You would only want to give them to our favourite munchkins!

It’s an all in one cookie cutter….cut out the shape then press the embossed side of the cookie cutter into your dough and it makes the indented shape which you fill with royal icing once they are baked.

The cookie cutter is from  FredandFriends.com…I picked it up in Brighton UK when we visited in September as I had not seen anything like it here in Canada. 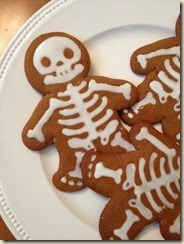 Had to laugh…as I was baking, cutting out shapes and lining them up on cookie sheets, Dear youngest son comes in and says…aren’t you rushing things a bit….bless his heart, thought I was making gingerbread boys for Christmas!

Posted by Leslie's Itchin to be Stitchin at 11:25 PM No comments:
Labels: baking

Can I get a giant Swoon 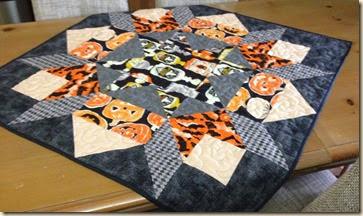 This fabric…Spooktacular by Blend, needed a pattern that allowed the large prints to shine.  This large swwon block was perfect to show off the fabric designs. 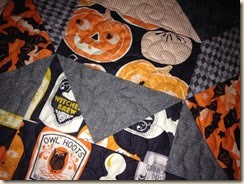 I had a set of 6 fat quarters, all fairly large prints that were just too nice to cut up into small pieces. I really liked the potion bottles so I left that the largest and used it for the centre block. The grey and orange look great together. It finishes at 40 X 40. 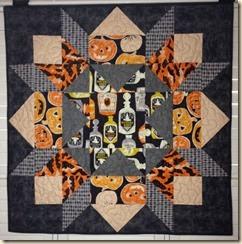 Armed with 1 fat quarter and a few scraps leftover from the Swoon Tabletopper I was determined to make good use of the pieces.

I managed to squeeze out a table runner set on point. I even used the leftover strips I had to piece my backing.  I love the black cats with their arched backs….hard to believe I didn’t have a Halloween runner in my repertoire…perfect timing! 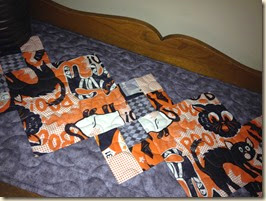 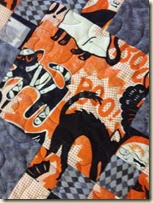 Posted by Leslie's Itchin to be Stitchin at 11:12 PM No comments:
Labels: quilts 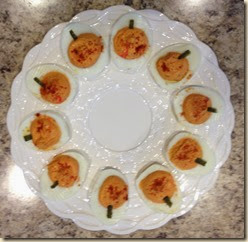 I thought I’d better share my Thanksgiving creations before the snow flies. I lucked out this year….Dear Brother and Marylynn hosted Thanksgiving which was fabulous I didn’t have to cook  and delicious. I brought devilled eggs designed as little pumpkins…ya ya , I know, I have way too much time on my hands. 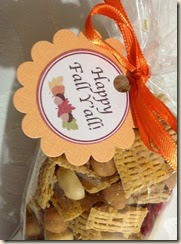 I also made up little trail mix favours for their guests….yum yum. You can find the recipe and free tag printable here http://makebakecelebrate.com/fall-trail-mix-with-free-printable/

Posted by Leslie's Itchin to be Stitchin at 10:15 PM No comments:
Labels: food 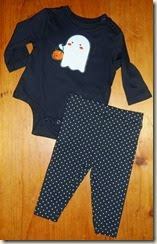 My Son in law’s sister just had a little girl and I made a few things for the new addition, Macy. I had this little ghostly trick or treat applique  in my stash for …forever. I found  a super cute black onesie and the cutest black polka dot leggings to go with it. Just a simple iron on applique and it’s the cutest outfit ever….Gosh I wish I had grand-daughters. 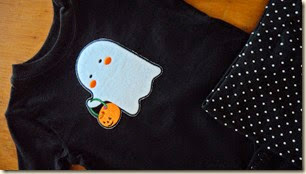 Posted by Leslie's Itchin to be Stitchin at 10:02 PM No comments:
Labels: family

Mama’s got her groove back

Ok, I know, I’ve been absent for over a month. Those fossils just about did me in. No wonder I’ve turned to alcohol to ease the pain! You know it’s fall when you have beer choices that include Pumpkin Ale.

I just couldn’t seem to get my mojo back…..I was exhausted and jet lagged for over a week when I got back (in bed by 9 but wide awake at 3am) For weeks I just couldn't get back into the swing of things, didn’t want to quilt, read or even bake….I don’t know what got out of into me. In my absence  I’ve celebrated two grandson’s birthdays (Ayden turned 5 and Owen turned 3), travelled to Pittsburgh for the game opener between the Penguins and Anaheim, I’ve gained 5 pounds *&)!&#)&)$^!)!*, taught 4 classes at the store, made a Lego quilt, a Halloween runner, a Halloween table topper, designed a new lap quilt, quilted a queen quilt, made 4 bibs, 1 baby’s outfit, sewn numbers and name patch on Dear Hubby’s hockey jersey )(*#@)^$)*@_*_$ , quilted my sister in law’s runner, finished a Beatle Bag for my sister’s birthday, and closed up the backyard pond!

OMG get me another beer!

Got to love this story of Dear Hubby while we visited Pittsburgh. Dear Hubby is the world’ s greatest Montreal Canadian fan. An absolute die hard…  He even has the team logo tattooed on his upper arm. I know…creepy!  Just to keep you in the loop…he hates the Maple Leafs…with a passion.

We are having dinner with my brother and his wife MaryLynn at Olive Garden before we go to the game and this perky, chatty young waitress starts chatting up Dear Hubby and Dear Brother. She finds out we are from Canada and she just loves Toronto and Montreal. They tell her we are going to the game and it turns out she is a huge Penguins fan, goes to the games all the time and loves hockey. So Dear Hubby pulls up the sleeve on his shirt to expose his tattoo and she looks at it stunned. She couldn't figure out the logo. Dear Hubby gives her a few clues….it's like playing charades with a giddy 5 year old.)**)&)!*_#*_!#*  It’s a Canadian team he says….it starts with an M he says…….No word of a lie she looks at him ecstatically just beaming and shouts…..Toronto Maple Leafs….LMAO