A little jet lagged but no worse for wear yet. Had a quick nap at the hotel then headed to Windsor to visit the Queen!  Well she was there but of course we didn’t see her.  My mom and the Queen are the same age so mom thinks she has a special connection to her. She is always comparing how well she has been preserved against the one who wears the crown. Actually my mom has faired much better. We had a lovely late lunch at The Drury House, met a sweet young waitress who had when young, played Frisbee with Prince William and Harry and met Princess Di. It was like meeting a celebrity for the fossils, they were so excited. We learned much more history about the Drury House than we had wanted to, as it had been the quarters of  a Nell Gwynn, the favourite mistress of King Charles II. They even showed us the secret tunnel he used to get laid  to the premise. Seems to run in the family with males named Charles!

We watched the swans being fed on the Thames, huge numbers, quite amazing to see. Fossils love nature, so that was time well spent.  Headed back to the hotel, had a quick swim, and am ready to crash! Here’s the fossils Dear mom and uncle enjoying the day.

Posted by Leslie's Itchin to be Stitchin at 5:16 PM No comments:

I thought it would be appropriate that I get tartan toes for my trip to the UK. My Dear Hubby says I’m never home…what the ____ is his problem. The last time I was away was with him!….oops I’m mistaken, I was away to The Checkers Annual Event with the girls from Kindred Spirits Quilt Co. a few weeks ago. Really, is he keeping track? You can’t really count this trip as it’s with my 86 year old mother and her 77 year old brother.  I know…what was I thinking…A fossil trip? Do I really need the hassle at my age.

This all started with my mother wanting to take one last trip back home. She was under the impression that it would be safe for an 86 year old woman to spend 3 weeks abroad gallivanting by herself. I don’t think so!  I said very little at first as sometimes she just jabbers on. She was going to backpack *_*(*^(*^)*  plus stay in youth hostels ))(&^*^*&)(…..mom that’s why they call them youth hostels not fosstels. I’m was beginning to wonder if she had a touch of dementia coming on, until she came to her senses and indicated that she realized she couldn’t go by herself. To the rescue comes the favourite daughter who for what ever lapse in judgement at that split second said….I’ll take you.  Then it was to include her brother as well whose school reunion was being held at the same time.  It’s the 60th reunion for the school…really how can they hold a 60th reunion? Would there be that many students that would be able to get there or are even still living, plus most of them won’t be able to remember anything anyway. Don’t get me wrong, I’m not that cynical and I do know that one of these days I will get old too but today I sit here wondering…why did I book that plane ticket. So the plan is that we fly from Toronto to London, do Windsor, head to St. Ives for a week, back to London, over to Paris for 4 days, back to London, and then up to Glasgow for the last week. I’m exhausted already, let alone herding the fossils this way and that, I’ll be hoarse before the second day from yelling cause they’re both deaf, plus I’ll probably get an ear infection from wearing ear plugs cause my mom snores worse than Dear Hubby.  I must be crazy!  Mother Dear even asked the travel agent if they could cremate her in the UK if something happened so that I would have an easier time to bring her back…REALLY

So…Enjoy the show  fossil expedition with me!

Posted by Leslie's Itchin to be Stitchin at 5:14 PM No comments:

I’m sure these are low cal

I’m not really a baker…not the yeast kind of baker anyway…but I was watching Anna Olson’s Bake. The episode on Cinnamon Sticky Buns and she made it look so easy that I thought…I can do that…and I did. It was really as simple as she made it look. The only thing hard about it was the wait times for the dough to rise… and trying to resist eating  the whole pan of them. If I can make these, then anyone can. I used my Kitchen Aid mixer with my dough hook to knead the dough, so no real manual labour involved. I followed her tip that when your dough climbs up the hook, it is kneaded enough, and she was right. I will definitely be making these again.

Posted by Leslie's Itchin to be Stitchin at 10:37 PM No comments:

An apple a day

I had always wanted to try an apple core quilt but was always daunted by the scalloped edge and the curved piecing. I finally overcame the fear and was pleasantly surprised at how simple it actually was to do. With a little patience, and good marking of points on the curved pieces, the pattern went together quite well. We have done a nice size table runner to showcase the applecores and will be offering it as a class at Kindred Spirits Quilt .  The fabric line is  Stonehenge and it looks amazing in it. I did a simple line quilting through out the runner and the saying “less is more” is so true when it came to the quilting as it shows off the curves quite nicely. The curved edge was fairly simple to bind as well using  2 .25 inch binding as apposed to 2.5 inch… and of course bias binding.

Posted by Leslie's Itchin to be Stitchin at 10:16 PM No comments: 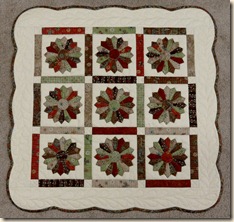 This little cutie turn out amazing. It finishes 28x28 and is darling. We are offering it as a class at Kindred Spirits Quilt Co. The fabric line is from Red Rooster and is called Whimsicals. It is Eleanor Burns pattern Mini Dresden and while the Dresden's are really tiny it was really fun to make. It is by far, one of my favourite quilts.

Posted by Leslie's Itchin to be Stitchin at 9:58 PM No comments:

I’m a fan of this one

My Oriental Dresden Fan sample is finished and ready for the store. I really like how it turned out and this was the perfect fabric line to use. It went together quite nicely as do all Eleanor Burns patterns. 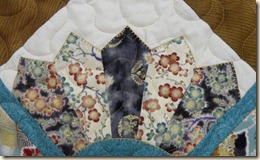 Posted by Leslie's Itchin to be Stitchin at 11:24 AM No comments:

It’s in the bag 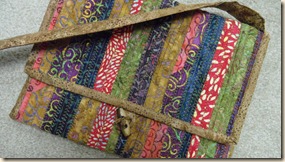 This is an amazing purse that will be offered as a class at Kindred Spirits Quilt Co. The pattern is the Thumballina  Bag and the sample was made from a Sushi roll…just like a Bali Pop but a few less strips. It’s a nice technique to try whereby you place strips of batting on the batik strip, fold over a few times and sew along the edge. Then you zig zag all the strips together to form the bag…So cool and I love the way it turned out. Wish it wasn’t a sample so I could take it home and put it into use.

Posted by Leslie's Itchin to be Stitchin at 9:10 PM No comments:

OMG…I’m reliving the nightmare…remember last October when Dear Hubby changed our kitchen taps and we were without water and taps for more than a few days… well to make a long story short, we did get the new tap installed. Even though we bought what we thought was a good brand, less than a year later, the tap was leaking, the tap swivel didn’t work properly anymore and you had to play with it to find the hot water. So….Dear Hubby decided to replace it yet again.  I dreaded the thought of being without water and taps again like last time but even I was at wits end with the tap.

Miracles do happen….cause Dear Hubby managed to install this tap in record time…less than half an hour and no drips.

Posted by Leslie's Itchin to be Stitchin at 11:10 AM No comments:

I always dread cutting circles out as I’m a perfectionist and I never ever get them just right. I’ve found a way to get them exact…with a little help from my friend. It’s my Cuttlebug and my Sizzix circle die. So simple, so easy, so perfect! You just iron your wonder under to the back of your fabric, place your fabric on the die, plastic plate on top and bottom, roll through the Cuttlebug and voila…..perfect circle..every time. This Mini Dresden pattern by Eleanor Burns is really mini…look how small the finished Dresden plate is. Teeny Wheeny and that little circle is really teeny too but look how perfect it is.

Posted by Leslie's Itchin to be Stitchin at 10:37 PM No comments:

Here’s what I’m working on for Kindred Spirits Quilt Co. These will be classes offered shortly.  Mini Dresden by Eleanor Burns using the Whimsical line from Red Rooster. Oriental Fan by Eleanor Burns as well with our oriental line and an apple core table runner which let’s you use a new template and technique. It’s in the Stonehenge line which I absolutely love. Looks like I’m going to be busy with these three.

Posted by Leslie's Itchin to be Stitchin at 10:20 PM No comments:
Newer Posts Older Posts Home
Subscribe to: Posts (Atom)